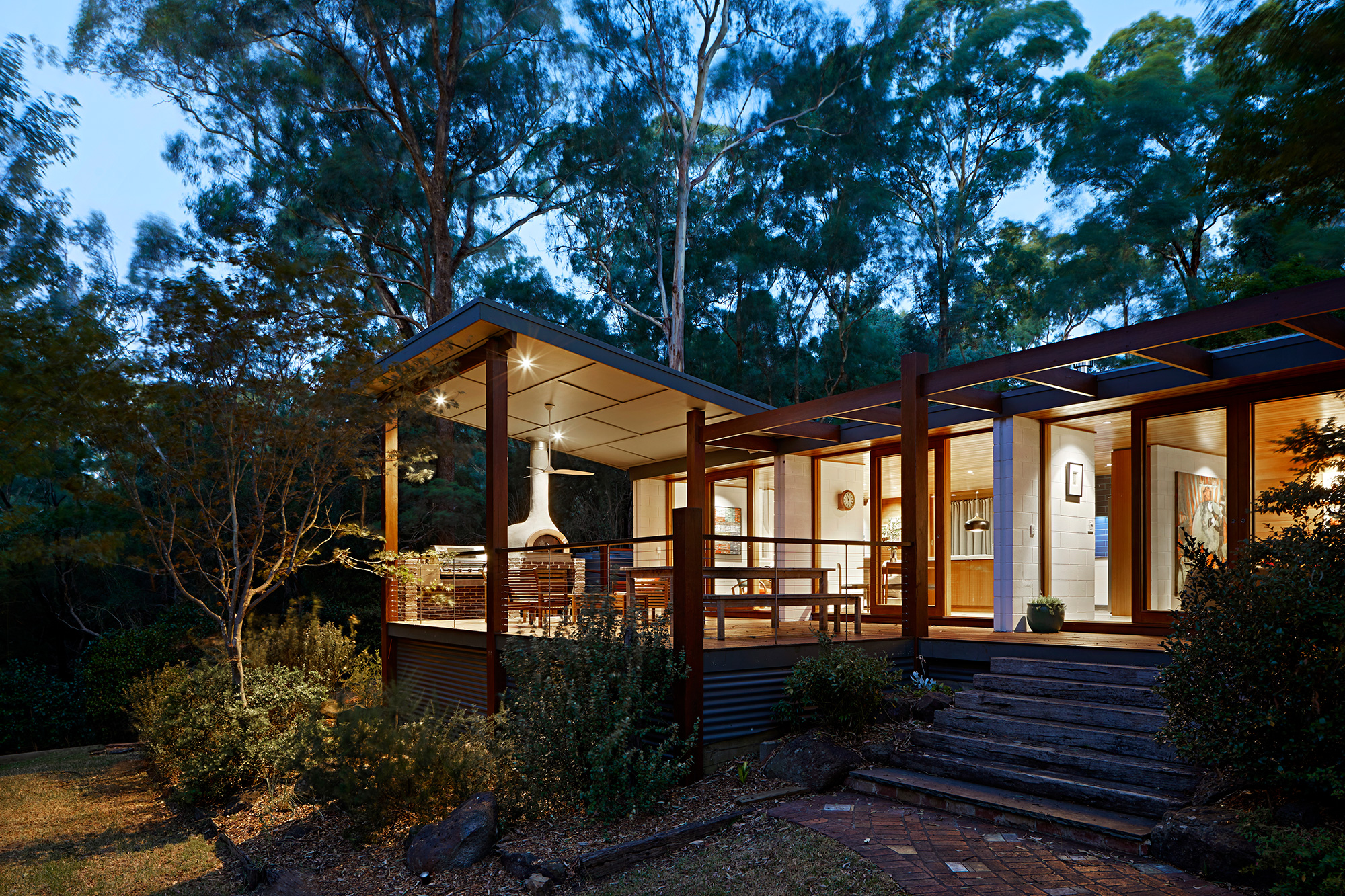 Originally designed by Architect David S Gordon for his family in the 1960’s, and now fully restored as a beautiful house for art and living. Interlocking linear forms step down the sloping site, with simple concrete block fin walls separating the spaces. The masonry blade walls run from inside to out, seamlessly cutting through continuous floor to ceiling walls of glass. Cedar ceilings with geometric skylight shafts and feature walls run throughout the building, giving the modern forms a tactile warmth. A simple palette of honest, natural, warm and unadorned materials. The grey of concrete, warmth of timbers and simple painted white surfaces are punctuated by bright colours in furnishings and artwork. 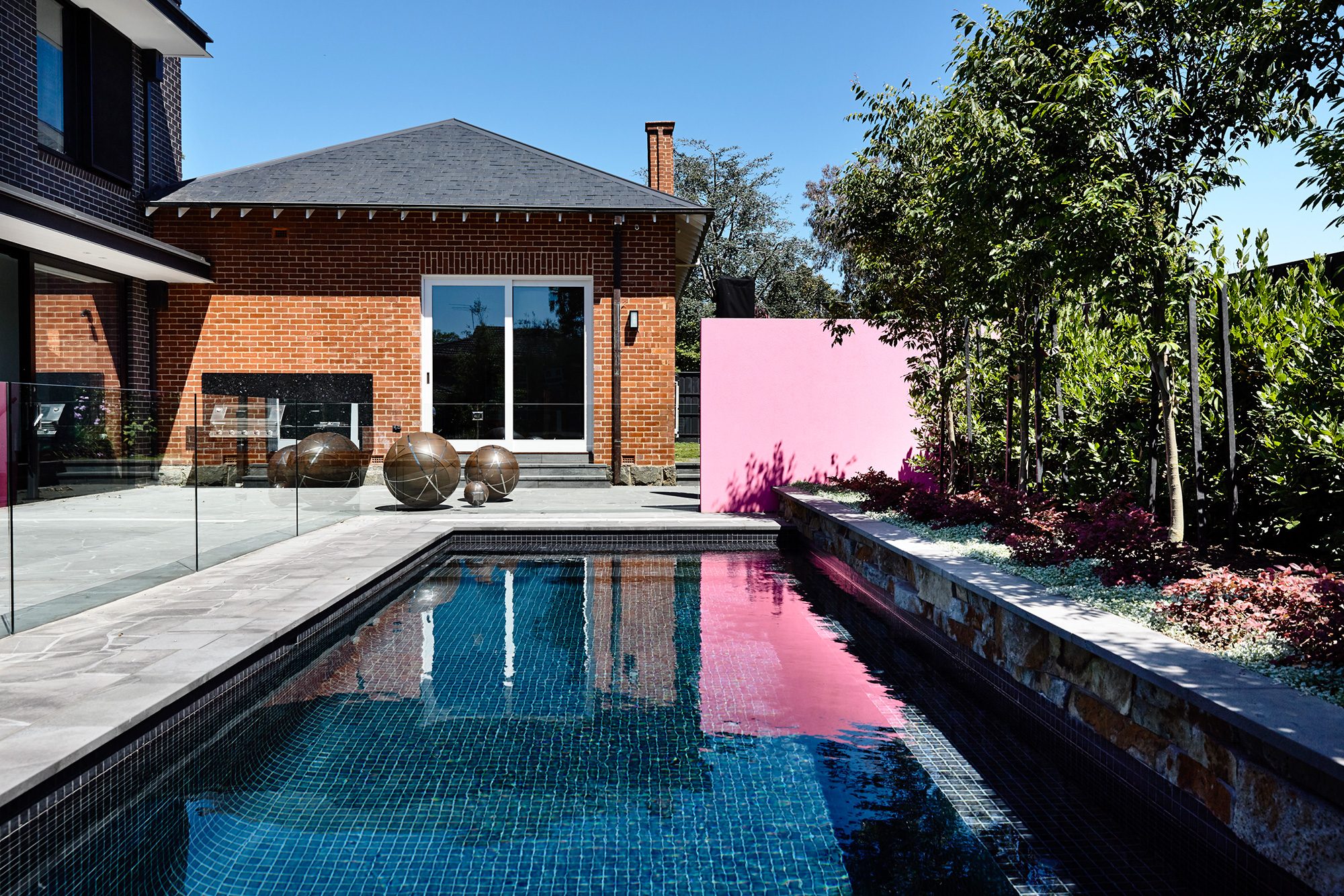 The existing areas of this period home were renovated and remodelled with a nod to the past, with detailing of the era, but with luxurious surface treatments and an added funky edge to suit the family. A major addition to the rear of the home re-orientated the living zones to face north, with direct access to the northern garden and pool area. The link between old and new is set around a large light court. The neutral palette of black, white, timber and concrete is punctuated with pops of bright colour. Spaces are large, light filled and inviting. 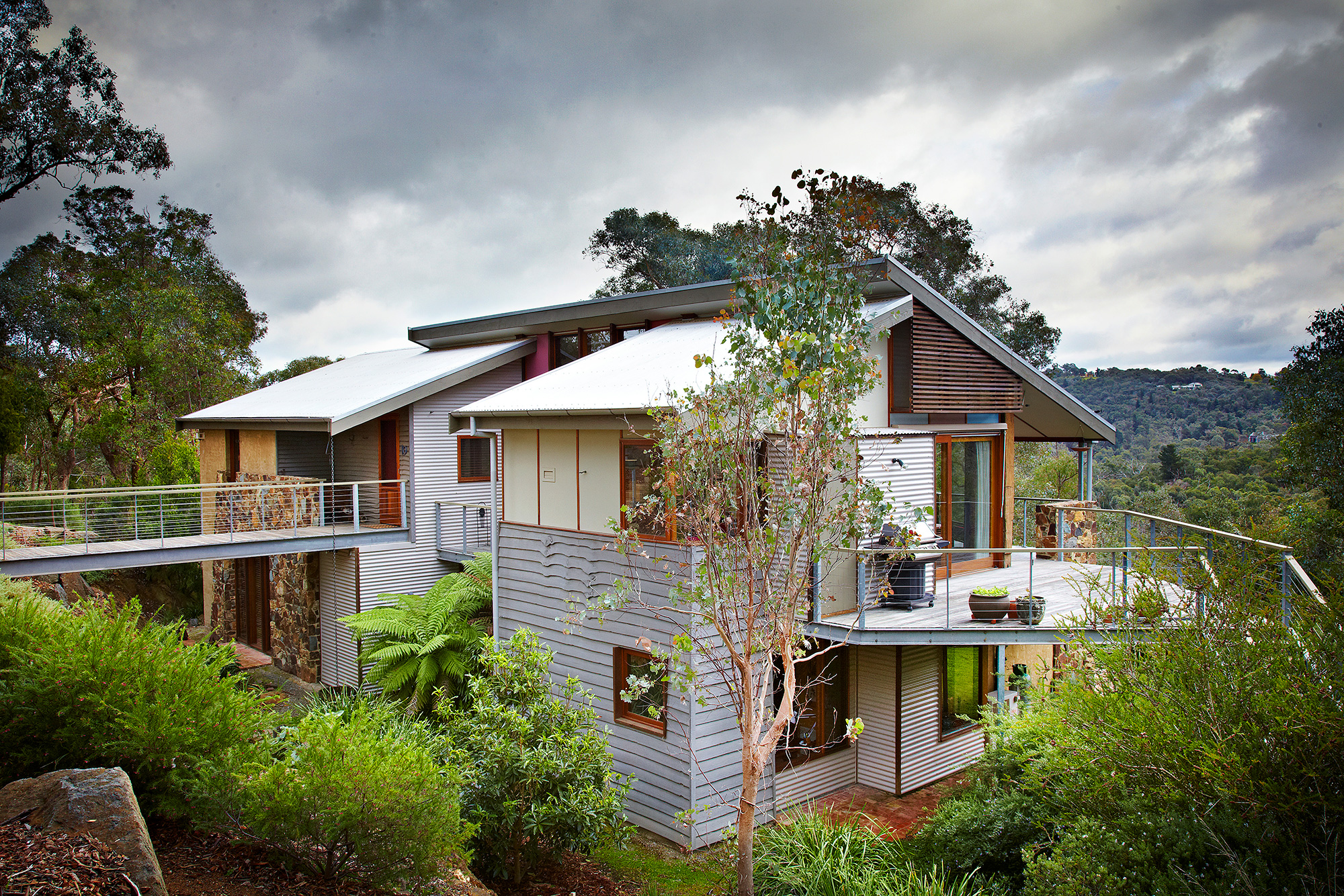 The challenging topography of the site, dry forest environs and fantastic views inform the design for this multiple level family home and office. The use of various reclaimed and local natural materials give a rich textural quality to the exterior; the roof form and masonry base providing an alpine aesthetic. The interior has the feel of a tree house, with the narrow building depth allowing strong visual links to the bush and plenty of light intake. The main design brief is the creation of a warm and inviting building. 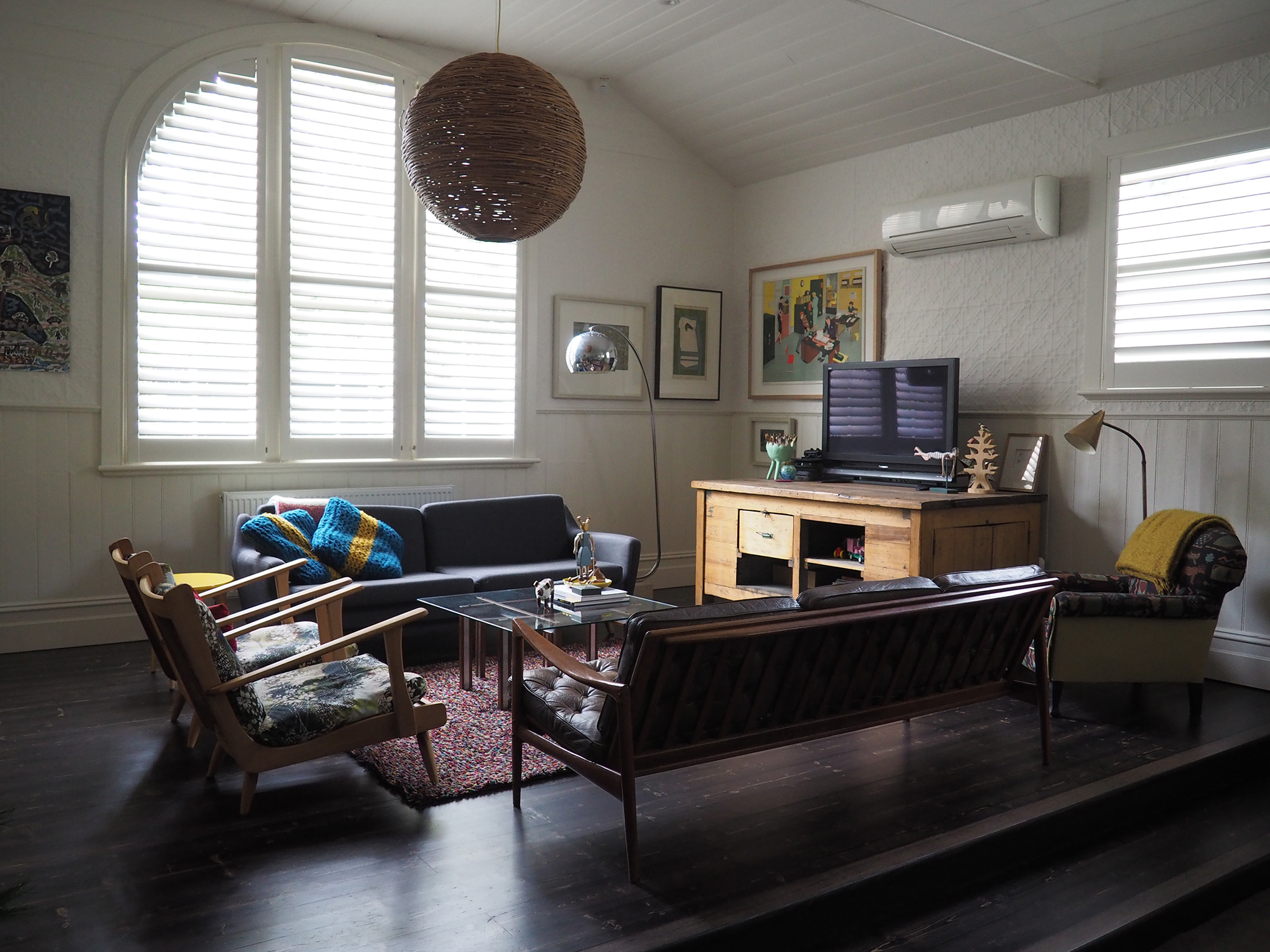 The studio was built in c.1890’s and was originally used as a dance studio, and later as a community theatre. In the 1980’s it was still being used as a theatre by The Kenwood Players, painted out black inside. It was subsequently used as an artist’s studio and later converted to become a studio apartment.

The studio has now been extended and adapted as a family home.

This project involves the addition of an upper storey extension and minor ground floor alterations.

The new upper storey addition contains a single bedroom, W.I.R. and ensuite built in light weight weatherboard clad stud walls to match the original materials and built form. The upper bedroom is built over the existing bedrooms below, allowing for retention of the very iconic and important forms of the dining and living Spaces, which still are reminiscent of the theatre. The space retained has wagon ceilings of timber lining boards, walls of pressed metal and timber lining to dado height, and the stage platform still present. 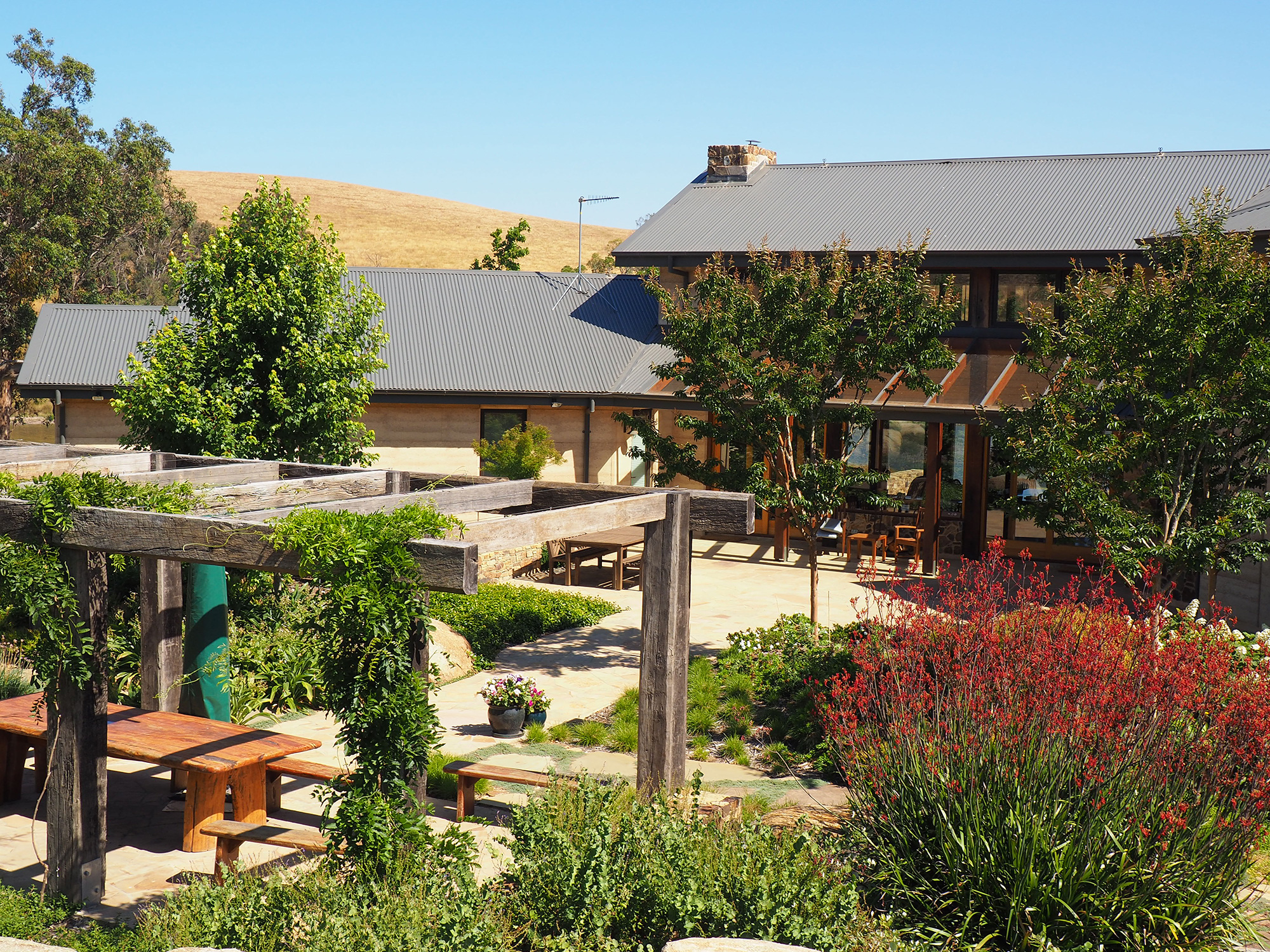 This rammed earth, stone and timber filled home sits on a beautiful site enveloped by forest, grazing land and a glorious waterway. Hand crafted artisan elements are treasured and feature throughout the home. The plan is set to provide three angled, zoned areas each with a strong sense of individuality and privacy, allowing for creation of outdoor spaces to suit all weather conditions. The shape provides each room with a focus to a different view. The large volume of the central living spaces connects all, and opens to both the sheltered garden and to the expansive view of the water. 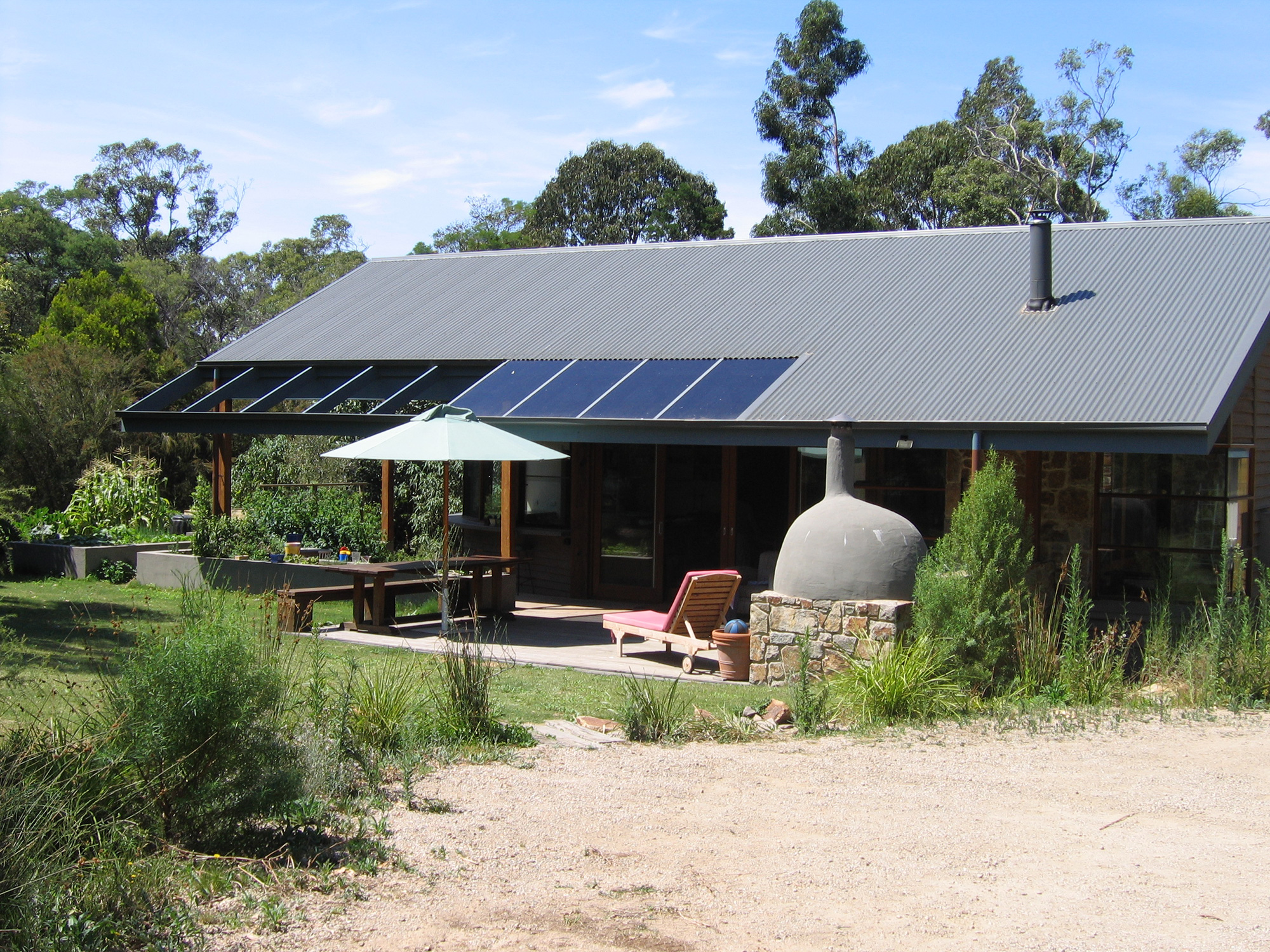 A home for a family fond of informal entertaining, outdoor living and easy overnight guest stays. This house sits lightly on the site with a dry creek bed meandering across the site to help control site drainage. The kitchen is the heart of the home, with the curved bench and windows allowing direct access to children’s play and kitchen garden planters outside. The covered outdoor cooking and eating area towards the north provide an extension of living and blur the division between inside and outside spaces. A guest pavilion is linked via a raised boardwalk.